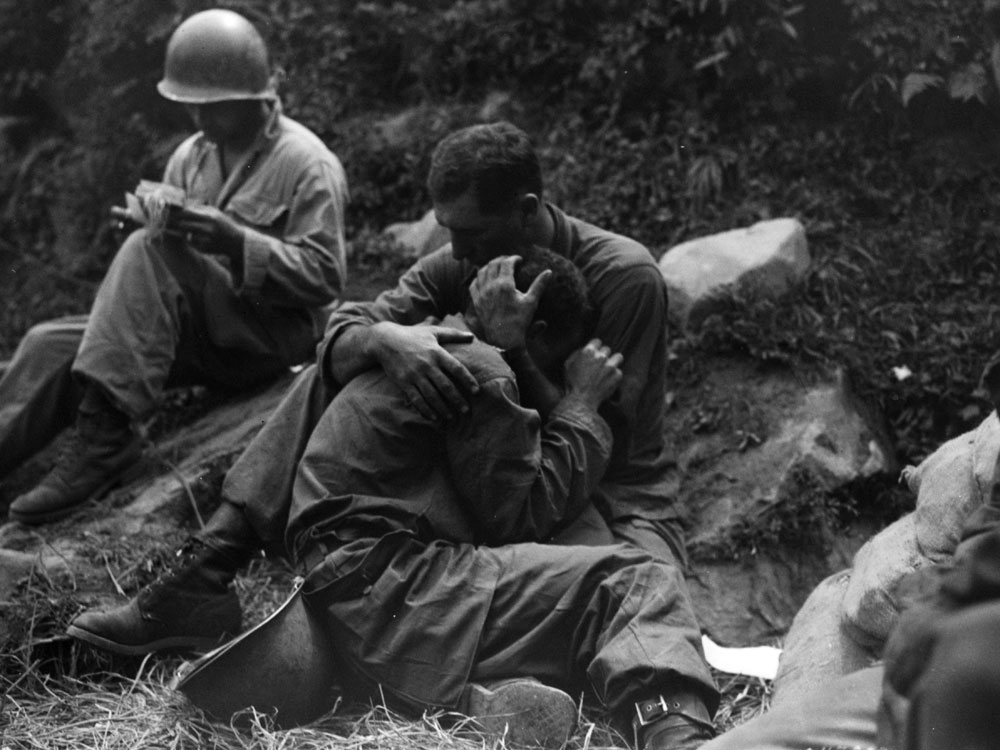 By the end of World War One , according to the BBC History site, the British Army had dealt with 80,000 official cases of shell shock, including those of Siegfried Sassoon and Wilfred Owen.

It is difficult for us to imagine how anyone exposed to trench warfare came back entirely sane; how many silent victims were there, sheltered by their families, who never sought treatment?

My grandfather served in the trenches. When I was a young teenager, I asked him to tell me what it had been like. He would say hardly anything at all about it; the only detail I remember was that he told me they had to use their own urine to shave in. Looking back as an adult, I now realise how impossible it must have been for him to begin to tell me what it had been like. If I had only known it, the real evidence was right in front of me. I just didn’t connect the dots.

It was well-known in the family that Granddad had  ‘black moods’. We were all used to them. Every now and then Granddad would sit, yellow-stained fingers clutching an inevitable cigarette, and stare into space, refusing to talk to anyone, hardly moving; not just for hours; for days on end. And we just worked round him. I don’t think anyone thought that that might have been something to do with the war..

He was an architect and builder, so in the second world war, when he was too old to fight, he had the enviable task of going into bombed buildings and figuring out the safest way to get victims, dead or alive, out. He never spoke about any of that either. Except once, my mother told me, when he came home and sat at the kitchen table and cried. He had been keeping a special eye on the young wife and baby of a lad he knew at the front. He found them in their house crushed behind the front door as they tried to get out.

On 7 July 1916, Arthur Hubbard painfully set pen to paper in an attempt to explain to his mother why he was no longer in France. He had been taken from the battlefields and deposited in the East Suffolk and Ipswich Hospital suffering from ‘shell shock’. In his words, his breakdown was related to witnessing ‘a terrible sight that I shall never forget as long as I live’. He told his mother: 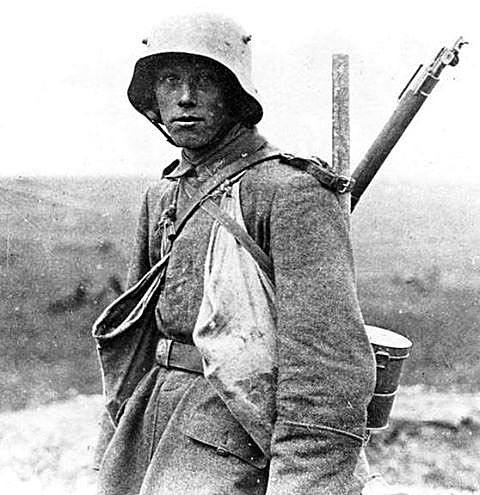 ‘We had strict orders not to take prisoners, no matter if wounded my first job was when I had finished cutting some of their wire away, to empty my magazine on 3 Germans that came out of one of their deep dugouts. bleeding badly, and put them out of misery. They cried for mercy, but I had my orders, they had no feeling whatever for us poor chaps… it makes my head jump to think about it.’

Hubbard had ‘gone over the top’ at the Battle of the Somme. While he managed to fight as far as the fourth line of trenches, by 3.30pm practically his whole battalion had been wiped out by German artillery. He was buried, dug himself out, and during the subsequent retreat was almost killed by machine gun fire. Within this landscape of horror, he collapsed.

Arthur Hubbard was one of millions of men who suffered psychological trauma as a result of their war experiences. Symptoms ranged from uncontrollable diarrhoea to unrelenting anxiety. Soldiers who had bayoneted men in the face developed hysterical tics of their own facial muscles. Stomach cramps seized men who knifed their foes in the abdomen. Snipers lost their sight. Terrifying nightmares of being unable to withdraw bayonets from the enemies’ bodies persisted long after the slaughter.

The dreams might occur ‘right in the middle of an ordinary conversation’ when ‘the face of a Boche that I have bayoneted, with its horrible gurgle and grimace, comes sharply into view’, an infantry captain complained. An inability to eat or sleep after the slaughter was common. Nightmares did not always occur during the war. World War One soldiers like Rowland Luther did not suffer until after the armistice when (he admitted) he ‘cracked up’ and found himself unable to eat, deliriously re-living his experiences of combat.

These were not exceptional cases. It was clear to everyone that large numbers of combatants could not cope with the strain of warfare. By the end of World War One, the army had dealt with 80,000 cases of ‘shell shock’. As early as 1917, it was recognised that war neuroses accounted for one-seventh of all personnel discharged for disabilities from the British Army. Once wounds were excluded, emotional disorders were responsible for one-third of all discharges. Even more worrying was the fact that a higher proportion of officers were suffering in this way. According to one survey published in 1917, while the ratio of officers to men at the front was 1:30, among patients in hospitals specialising in war neuroses, the ratio of officers to men was 1:6. What medical officers quickly realised was that everyone had a ‘breaking point’:

weak or strong, courageous or cowardly In the early years of World War One, shell shock was believed to be the result of a physical injury to the nerves. In other words, shell shock was the result of being buried alive or exposed to heavy bombardment. The term itself had been coined, in 1917, by a medical officer called Charles Myers. But Myers rapidly became unhappy with the term, recognising that many men suffered the symptoms of shell shock without having even been in the front lines. As a consequence, medical officers increasingly began emphasising psychological factors as providing sufficient cause for breakdown. As the president of the British Psycho-Analytic Association, Ernest Jones, explained: war constituted ‘an official abrogation of civilised standards’ in which men were not only allowed, but encouraged:

‘…to indulge in behaviour of a kind that is throughout abhorrent to the civilised mind…. All sorts of previously forbidden and hidden impulses, cruel, sadistic, murderous and so on, are stirred to greater activity, and the old intrapsychical conflicts which, according to Freud, are the essential cause of all neurotic disorders, and which had been dealt with before by means of ‘repression’ of one side of the conflict are now reinforced, and the person is compelled to deal with them afresh under totally different circumstances.’

Consequently, the ‘return to the mental attitude of civilian life’ could spark off severe psychological trauma. The authors of one of the standard books on shell shock went so far as to point out that a soldier who suffered a neurosis had not lost his reason but was labouring under the weight of too much reason: his senses were ‘functioning with painful efficiency’.

How were these men to be cured of their painful afflictions? From the start, the purpose of treatment was to restore the maximum number of men to duty as quickly as possible. During World War One, four-fifths of men who had entered hospital suffering shell shock were never able to return to military duty: it was imperative that such high levels of ‘permanent ineffectives’ were reduced. However, the shift from regarding breakdown as ‘organic’ (that is, an injury to the nerves) to viewing it as psychological had inevitable consequences in terms of treatment. If breakdown was a ‘paralysis of the nerves’, then massage, rest, dietary regimes and electric shock treatment were invoked. If a psychological source was indicated, the ‘talking cure’, hypnosis, and rest would speed recovery. In all instances, occupational training and the inculcation of ‘masculinity’ were highly recommended. As the medical superintendent at one military hospital in York put it, although the medical officer must show sympathy, the patient ‘must be induced to face his illness in a manly way’.

Sympathy was only rarely forthcoming. Men arriving at Netley Hospital (for servicemen suffering shell shock) were greeted with silence: people were described as hanging their heads in ‘inexplicable shame’. No-one better described the mix of shame and anger experienced by the war-damaged than the poet, Siegfried Sassoon. In October 1917, while he was at Craiglockhart, one of the most famous hospitals for curing officers with war neuroses, he wrote a poem, simply called ‘Survivors’:

No doubt they’ll soon get well; the shock and strain

Have caused their stammering, disconnected talk.

Of course they’re ‘longing to go out again’, –

These boys with old, scared faces, learning to walk.

Subjection to the ghosts of friends who died, –

Their dreams that drip with murder; and they’ll be proud

Of glorious war that shatter’d their pride…

Men who went out to battle, grim and glad;

Children, with eyes that hate you, broken and mad. The Cool Web itself
Introducing Robin O’Neill, The Conductor of ‘The Cool Web’