By Sue Curtis on September 6, 2014 in Music, Robert Graves

Robin O’Neill at the Wimbledon festival

Robin O’Neill has been part of this project from the very beginning.

Robin knew of Jools’ music from his sound-track to The Door, a short film by Andrew Steggall, Andrew with Charles Dance, who starred in ‘The Door’

who directed The Soldier’s Tale at the Old Vic, (stay with me here) 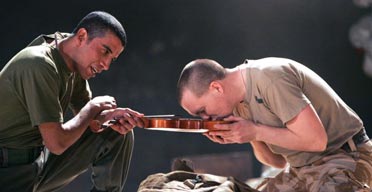 The Soldier’s Tale at the Old Vic

for which Robin directed the music.

Commenting on Robin O’Neill’s work as music director of The Soldier’s Tale (in a European/Iraqi collaboration which took him to Baghdad in Sept 2005 and then on a two week run at the Old Vic Theatre) the late Sir Charles Mackerras said “I would like to congratulate Robin O’Neill on his marvellous conducting of the whole ensemble, whether European or Iraqi. I particularly admired the fact that a great deal of the Stravinsky seemed to be played from memory. This in itself is a tremendous feat!”

Iraqi musicians in The Soldier’s Tale

We met to discuss the project over lunch in London at the point where we had a rough idea of the libretto, but had written none of the music at all. Robin’s enthusiasm and genuine interest was one of the spurs which turned a good idea into a real piece of work.

Since then he has stayed faithfully with it, consulting on the score, pointing us in the direction of the right orchestra, Endymion, and the Philharmonia Voices, whose work he knows through his own long association with them, and now conducting it at Bath Abbey eighteen months  after our first meeting.

The Philharmonia at the Royal Festival Hall

Robin O’Neill’s conducting has been praised for it’s balance of intellectual rigour, immaculate line and visceral excitement. A performance of the Sibelius 7th Symphony prompted one reviewer to note that “he obtained a rock-like stability to the tonal structure that underpins the disturbances, thereby creating a symphonic statement both powerful and concise.” Jeremy Irons, who read the soldier in the first production of ‘The Soldier’s Tale’ Andrew Steggall directed at the Old Vic

In his parallel career, Robin O’Neill is principal bassoonist with the Philharmonia Orchestra and has held the same position with the Chamber Orchestra of Europe and the English Chamber Orchestra. He is a member of London Winds and the Gaudier Ensemble.

He is a Grammy nominated recording artist and has recorded virtually the whole of the core chamber music repertoire with more than 40 CDs to his name on labels such as Hyperion, Chandos, Decca and Philips.

And now, what an immense privilege it is to have him shaping and conducting the first performance of The Cool Web.